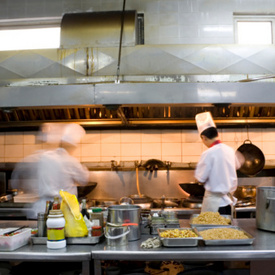 Baltimore, MD – A Baltimore jury awarded over $34 million to 20 Ruth’s Chris workers on Wednesday, July 28, 2010, for injuries resulting from carbon monoxide exposure in 2008, as reported by The Baltimore Sun. The workers claimed the exposure lead to permanent brain damages, resulting in personality changes, memory problems and the loss of “conjugal affection” for some.

The lawsuit went after the owner of the hotel where the Ruth’s Chris was located, TBOP Pier 5 LLC, and its operator, MJ Harbor Hotel LLC. The suit claimed negligence on both parties, explaining the two disabled a safety device that could have prevented the leak. Ruth’s Chris was not named in the lawsuit.

The leak was discovered on February 28, 2010, after firefighters responded to a complaint that employees were becoming ill. Approximately 150 people were evacuated from the restaurant that evening. Some 17 people were sent to the hospital for treatment after complaining of nausea and dizziness.

The first complaint towards the incident was filed approximately three weeks after the incident. An amended version came last year and claims the defendants’ negligence and poor equipment maintenance created a dangerous situation that exposed the plaintiffs to “deadly levels of carbon monoxide.”

Individual plaintiffs received between $11,000 and $1 million for future medical expenses, and between $26,000 and $1.15 million in future lost wages.

While these figures are likely to remain, the pain and suffering awards that reach past $710,000 that were given to 14 plaintiffs will likely be lessened. Maryland law puts a cap on pain-and-suffering damages at $710,000, but jurors are not made aware of the limit in order to keep them from compensating the plaintiffs elsewhere.

The lawyer for the plaintiffs stood on the court steps after the hearing and described the 2008 gas leak at the Pier 5 Hotel as “the worst carbon monoxide poisoning incident in the history of Baltimore.”