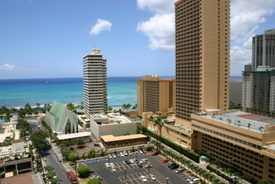 Kaneohe, HI – A 57-year-old college professor at the State University of New York at Oneonta died Tuesday, July 27, 2010, one day after being struck by a car in Kaneohe, as reported by the Star-Advertiser.

The professor and his wife were in Hawaii visiting their daughter, according to relatives who spoke to the Daily Star newspaper in Oneonta New York.

Police reported a car driven by a 22-year-old woman hit Shrader. The collision happened in front of a Shell gas station on Kamehameha Highway, just south of Pahia Road.

The woman was attempting to make a left turn into traffic, when Shrader, who approached the vehicle from the right, stepped in front of the vehicle.

According to police reports, the woman’s 2005 Saturn Ion accelerated and knocked Shrader to the ground.

He was transported to the Queen’s Medical Center with head injuries and labeled as critical condition. His injuries proved fatal the next day.

Shrader was a professor of philosophy at SUNY at Oneonta. He was chairman of the philosophy department from 1986 to 1991 and from 1993 to 2008. He was a visiting fellow at the East-West Cener in Manoa in 2006 and 2009, according to the Star-Advertiser.