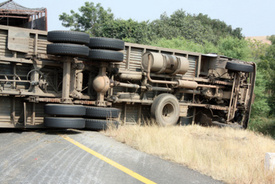 Shirley, NY —A massive vehicle pile-up along the Long Island Expressway in Shirley involved 35 vehicles and left one person dead and 33 injured. The fatal automobile accident occurred on Dec. 19, 2012, near Exit 68 just before 3 p.m., reports the New York Daily News.

According to preliminary investigations, it is believed that an out-of-control trucker caused the deadly multiple-vehicle accident.

The wreck reportedly set several vehicles and an 18-wheeler on fire and left others with damage.

One person suffered fatal injuries while two others were seriously injured. Sixteen other motorists also reported injuries that were not considered life-threatening. In all, 33 people were injured in the wreck.

Police are currently investigating how the accident occurred and what role the trucker had in the chain-reaction accident.

The identities of those involved are being withheld at this time.