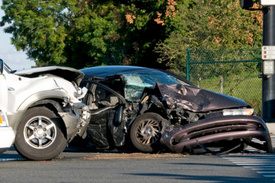 Vineland, NJ – A two-vehicle collision involving a sports-utility vehicle on Friday, September 10, 2010, resulted in the death of a woman, as reported by The News of Cumberland. The crash happened at approximately 10 a.m.

Carmen L. Perez, 56, was a passenger in the car that was struck by the SUV. She was pronounced dead at the scene, according to Vineland Police Traffic Safety Unit Officer David Tesorini.

Her husband, the driver of the car that was struck, was flown to Cooper University Hospital in Camden. Harry Perez, 58, reportedly suffered life-threatening injuries from the collision.

The couple were in a blue Pontiac Sunfire. They were traveling west on West Wood Street when the vehicle was struck on its passenger side by a gold 2002 Ford Explorer. Police reported the driver of the Explorer was 40-year-old Brenda J. Kelly.

Kelly was traveling south on North 4th Street when she failed to stop for a stop sign, which resulted in the lethal crash, according to Teseroni.

The automobile-SUV crash is under investigation. Officer Baron McCoy is in charge of the operation. As of Friday afternoon, no tickets were issued.