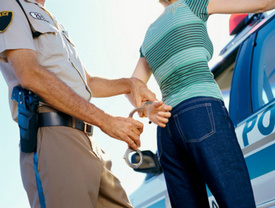 Dumont, NJ – A woman who was on parole for leading police on a 150-mile chase as she threatened to kill her girlfriend was arrested again, after she showed up at her ex-girlfriend’s house, a violation of her restraining order, as reported by The Jersey Journal.

Elanore Valdenarro, 44, was arrested Wednesday, September 8, 2010. She was charged with violating the restraining order that prohibited her from contact with her ex, Yvette Cid. Cid lives in Greenville, according to police.

Cid reported she was asleep when Valdenarro came into her house. She explained that one of her sons came home to find Valdenarro in the house and threw her out. The son filed a complaint the following day.

The incident that spurred the restraining order occurred on September 4, 2009. Police received a call at approximately 7:20 p.m. from Cid stating she was in Valdenarro’s SUV and that Valdenarro would not let her out. She told the officers the Ford Explorer was traveling south on the New Jersey Turnpike.

Within 10 minutes, police spotted the vehicle and tried to pull Valdenarro over. She refused and the chase began. She eventually pulled off at Exit 12A, where she was arrested.

Valdenarro pleaded guilty to criminal restraint and was sentenced to five years probation. She was also ordered to counseling.

The recent violation has led to her arrest, where she is currently held at Hudson county jail in Kearny. She is held on $10,000 bail, with a $1,000 cash option. Her next court date is set for September 29.