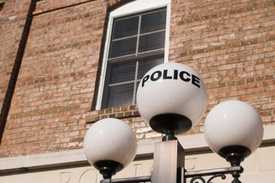 Providence, RI – A Providence police officer who raped a woman inside an empty police substation and then responded to her family’s 911 call was sentenced to 40 years in prison Thursday, September 9, 2010, as reported by The Boston Globe. The presiding judge likened the officer’s actions to “something out of a horror movie.”

Marcus Huffman, 40, was convicted of first-degree sexual assault for the March 2007 rape of a woman he picked up outside a Providence nightclub while on duty.

Prosecutors allege the woman was intoxicated at the time and unable to defend herself, which prompted Huffman to offer her a ride home. Instead of taking her home, he drove her to a substation and raped her. He left her on the bathroom floor.

The woman walked to her haunt’s house, and after her family called 911 to report the attack, Huffman was one of the responding officers. Prosecutors said he never mentioned the incident.

Huffman joined the police force in 1994. He tearfully apologized in court to the woman, his family and to the Police Department for his self-described lapse in judgment.

Huffman’s lawyer told the press the sentence was excessive and that he plans to appeal.

Esserman stated, “He does not represent what the Providence Police Department and our officers stand for.”

The woman was 19-year-old at the time of the attack.