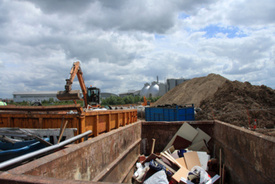 Providence, RI – The corporation that owns Rhode Island’s main landfill accused a developer of a “$20 million blunder,” stating the developer constructed an unnecessary tipping facility which is now scheduled for demolition, as reported by The Boston Globe.

The lawsuit, filed by the Rhode Island Resource Recovery Corporation, states the tipping station, designed and managed by Ahlborg Construction Corporation, a Warwick company, was the product of gross mismanagement and fraud.

Court documents state there was never a need for the tipping facility, or transfer station, at the landfill, but that the project was unanimously approved. The project has been plagued by cost overtures since its construction.

The Resource Recovery corporation owns and operates the Central Landfill located in Johnston.