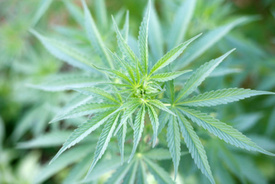 Torrington, CT – A 29-year-old man with a list of prior marijuana offenses is scheduled to appear in court on Monday, September 13, 2010 for accusations that he was growing pot in the backyard of his McKinley Street home and cultivating five-foot plants in a sophisticated setup in his basement, as reported by the Hartford Courant. The basement setup included a watering system, humidifiers and growing tents.

An officer responded to a complaint about a dirt bike on McKinley Street on Saturday, September 11 and found marijuana growing in a container in the backyard of the home of

Detectives obtained a search warrant and discovered a growing operation in Wakeman’s basement. There were approximately 83 plants in the basement, according to police.

Police also seized cash, three laptop computers, drug paraphernalia and books on cultivating marijuana. Wakeman was charged with possession of marijuana with the intent to sell, cultivation, operating a drug factory and other offenses.

He is currently held on $100,000 bail as he awaits a Monday arraignment in Bantam Superior Court.