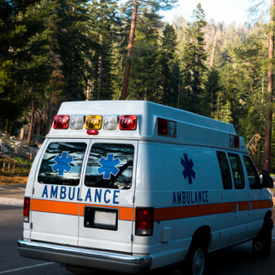 Littleton, ME – A two-vehicle crash on U.S. Route 1 in Littleton on Monday, August 30, 2010, resulted in a Mapleton man sustaining several broken bones, as reported by the Bangor Daily News. The motor-vehicle accident happened just after 6 p.m.

According to State Police Sgt. Julie Bergan, Elmo Villeneuve, 22, of Royalton, New Brunswick, was traveling northbound on Route 1 when he attempted to make a left turn into a driveway along the roadway.

At the same time, 27-year-old Dave Guerrette, of Mapleton, was traveling southbound in a 2000 Honda Civic when it struck Villeneuve’s Chevy truck head on.

Bergan reported that Villeneuve apparently did not see Guerrette.

A few minutes after the cars crashed, a Crown Ambulance crew from Presque Isle that was traveling northbound stopped to help the crash victims. Guerrette was alert and speaking at the scene. Firefighters from Littleton, Monticello and Houlton arrived soon after.

The Houlton Fire Department extricated Guerrette from his vehicle, which was totaled. He was transported to Houlton Regional Hospital via ambulance.

Guerrette’s condition was not immediately available as of Tuesday, August 31.

Villeneuve, whose vehicle sustained approximately $4,000 in damage, was uninjured.

Trooper Chad Fuller is the investigating officer. He was assisted by Chief Deputy Craig Clossey of the Aroostook County Sheriff’s Department and Sherriff’s Deputy Rudy Levesque.