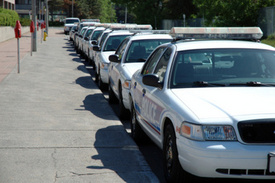 Portland, ME – An excessive force civil trial for two police officers began Tuesday, August 31, 2010, at the U.S. District Court in Portland, Maine, as reported by the Portland Press Herald. The suit stems from a 2007 arrest.

Michael Fortin accuses a Wells police officer, Jacob Titcomb, and an Ogunquit officer, Matthew Buttrick, of using excessive force against him during an arrest at his girlfriend’s apartment on May 26, 2007.

Fortin says the officers assaulted him and repeatedly kicked him in the leg, which ruined his ability to work as a carpenter.

The officers say Fortin was drunk and disorderly.

The incident that led to the lawsuit began when police responded to a report of a domestic violence assault in a car that was traveling on Route 1 in Ogunquit. Officers from Wells and Ogunquit found the vehicle parked at the apartment.

According to the officers, Fortin was outside the apartment when they arrived and told them nobody was home. Fortin then went inside the apartment. The two officers say they looked through a window and saw Fortin wrap his arm around his girlfriend’s head in attempts to keep her from answering the door.

Titcomb called for backup, according to his lawyer, and a few minutes later Fortin’s girlfriend opened the door and allowed Titcomb inside.

The girlfriend then came outside to speak with other officers. Titcomb and Buttrick claim they told Fortin not to go outside, so his girlfriend could speak to the officers, but that he tried to push through.

Upon Fortin’s efforts to push through the officers, they handcuffed him and took him to jail. The officers claim they used reasonable force.

Fortin claims otherwise. Fortin claims they twisted his arms and kicked him in the left leg at the knee, which caused a rupture of three of its four ligaments.

The trial is expected to last three days.