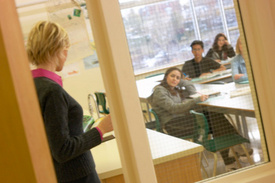 Faith Kramer, a tenured health and gym teacher at Rocco Laurie Intermediate School in New Springville and mother of two, allowed her students to use slang terms to describe sexual acts during the discussion. The city decided that this was inappropriate for the classroom and suspended her.

The teacher filed a $1 million lawsuit against the city Education Department.

Staten Island reported Tuesday that the settlement was reached in order to avoid costly litigation.

The judge who allowed the lawsuit, Judge Jack B. Weinstein, wrote, “If the [Department] of Education wants its teachers to instruct adolescents about HIV using Latinism of the academy, excluding vulgarism of the street, it should tell them so, plainly.” He acknowledged that many students were unfamiliar with the “clinical or correct” terms of sexual activity, but are well aware of slang terms which can be found in famous works of literature widely read by those in the students’ age group.

Kramer was suspended for eight months. She returned to the school in the fall of 2008.