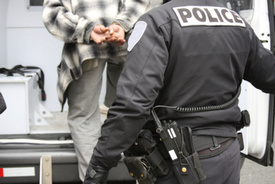 Butler County, PA – A 75-mile chase that reached speeds up to 130 miles-per-hour on Sunday, August 29, 2010, resulted in police from three jurisdictions joining the chase, one officer with a broken hand, several cars damaged and a Leetsdale man in jail, as reported by The Pittsburgh Tribune Review.

John J. Joseph, 31, was in the third year of a four-year parole term. He was sentenced to the parole after pleading guilty to burglary in Allegheny County in 2007. He has earlier convictions on minor charges under his belt as well. On Sunday morning, at approximately 6 a.m., he stopped his Jaguar on the northbound ramp near exit 85 on Interstate 79.

A Jackson police officer pulled over behind his stopped vehicle and asked if Joseph was in need of help, according to State Trooper Ronald Kesten. During the conversation, Joseph reportedly grew agitated and disorderly for unknown reasons. He got in his vehicle and took off going north on I-79.

The Jaguar finally came to a stop after it hit a bridge abutment near Heidelberg at approximately 6:50 a.m., according to police.

Investigators reported they were not sure if Joseph was under the influence of drugs or alcohol.

He is scheduled to appear in Butler County Court on September 7, according to a Butler County Prison official. His bail is set at $100,000.