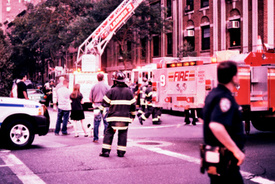 Cook Township, PA – A two-vehicle crash along Route 711 in the village of Stahlstown on Saturday, August 28, 2010, left one woman dead and another seriously injured, as reported by The Tribune Review.

Police reported the van was driven by 35-year-old Matthew Carter, of Verona. He was transporting three children, aged 3, 9 and 11 years old. Neither the children nor Carter were injured.

The Jeep passenger was pronounced dead in Excela Health Frick Hospital in Mt. Pleasant. The driver of the Jeep, whose identity has not been released, was flown to UPMC Presbyterian in Oakland with severe injuries.

The SUV-van crash sent the van into a porch of a nearby home. The Jeep landed in the yard.

The road remained closed until late Saturday as investigators reconstructed the collision.