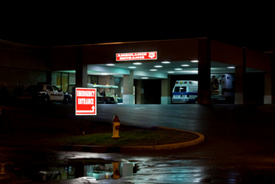 Thornwood, NY – A 24-year-old man was arrested and charged with vehicular assault, leaving the scene of an accident and driving while intoxicated Sunday, August 29, 2010, after he hit a 17-year-old girl walking along Broadway at approximately 5:50 a.m., as reported by the Journal News.

The 17-year-old Ossing girl was hospitalized with leg and head injuries. She was reportedly walking along the road with a friend when a 2008 Nissan that was traveling northbound struck them. The car fled the scene.

Mount Pleasant police responded to a passer-by’s 911 call, whereupon the uninjured teen gave a description of the vehicle. Mount Pleasant Officer Peter Blume spotted the described vehicle in the parking lot 10 minutes after the hit and run.

Officer Fred Kolodzinski arrested Jose Deleon-Adames, of the Bronx. The charges of vehicular assault and leaving the scene are felonies. The DWI charge is a misdemeanor.

The injured girl was transported to Westchester Medical Center in Valhalla. Her condition was unavailable, but was deemed non-life threatening.