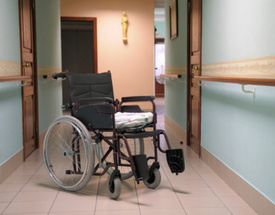 West Hartford, CT – An 88-year-old man who was bound to a wheelchair died after he fell from his chair at approximately 9:20 a.m., Saturday, August 22, 2010, outside the assisted living facility, Bishop’s Corner Skilled Nursing & Rehabilitation, according to The Hartford Courant.

Percy Sumner’s wheelchair rolled down an embankment and over a 2- to 3-food ledge. The fall resulted in Sumner hitting his head on the sidewalk. According to Lt. Jeffrey Rose, Sumner was transported to St. Francis Hospital and Medical Center after the accident, where he later died.

An autopsy was not planned.

A police investigation is underway though.

The Hartford Courant also reported that four months ago, officials found the home failed to make sure its facility was free of dangers that could cause accidents, according to an inspection report on http://www.medicare.gov.

One environmental factor at the nursing home was rated three out of four by inspectors. Four depicts the environment poses the highest risk of harm. A rating of three means a resident suffered harm from a problem that inspectors identified.

The report states the problem was corrected by June 25.

Another environmental factor the inspectors examined, a program to keep infection from spreading, scored a two. The score means inspectors found a deficiency that has caused minimal harm to a resident, or it has created the potential for more serious harm.

The overall rating for the facility was one out of five stars.