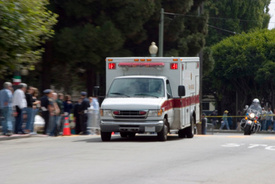 Staten Island, NY – A 48-year-old mother of five was struck and killed by an out-of-control livery cab as she stood at the intersection of Vanderbilt and Tompkins avenues around 7 a.m., Saturday, August 21, 2010, as reported by Staten Island Live.

Sylvia Cameron was traveling to the bus stop on her way to work when the 66-year-old driver of a Clifton Car Service 2001 Crown Victoria hit her.

The car proceeded to jump the curb and tear through a lawn and fence before becoming lodged between 140 and 144 Vanderbilt Avenue, according to poice.

Staten Island Live reported from an unnamed source the driver of the Crown Victoria may not survive either.

Neighbors who heard the crash, which broke windows and ripped off pieces of both houses, attended to the driver and pedestrian injured in the crash as they awaited paramedics. When EMS workers and police arrived at the scene, they found Cameron on the ground with head trauma. She was transported to Richmond University Medical Center, West Brighton and pronounced dead.

News on the cabbie is vague. His name has not been released and neighbors were unsure of his status. One described him as “in and out” of consciousness, while another said, “I think he was moving some.”

The investigation is ongoing, but police say they do not believe a criminal element played a role in the crash.

Sylvie Cameron was employed by the Metropolitan College of New York as the coordinator of graduate student advisement and international students. She is survived by five children.