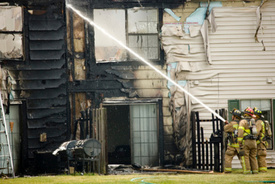 Brooklyn, NY – Three people were hospitalized with critical injuries after a fire erupted in an apartment building in Gravesend just after 2:30 a.m., as reported by NY1.com.

The blaze at the six-story, 120-unit building on Colby Court was brought under control over an hour later.

According to Acting Division Chief Martin Ford, “The trucks continued searching and found two more occupants in the rear bedroom. They were removed…The fire went to second alarm. The fire had extended to the area in the roof that we called the cockloft. The trucks were able to cut the roof and prevent the extension. The fire was extinguished.”

The three people who were injured were in their 70s and 80s. Upon rescue, two of the victims were not breathing. Sources reported they were expected to survive though. All were taken to Coney Island Hospital in critical condition.

Six firefighters sustained minor injuries, mostly due to smoke inhalation. Four other civilians were treated at the scene.

Displaced residents were forced to contact Red Cross or stay with friends.

Fire investigators say they believe the fire was sparked by an electrical problem within the building.

An investigation is ongoing.