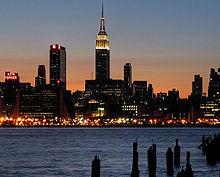 New York, NY – A 17-year-old girl fell from a window of the Herald Towers in midtown Manhattan on the morning of Friday, August 27, 2010, as reported by WPIX. According to WABC-TV, Channel 7, the teen was the daughter of the U.S. Ambassador to Thailand.

Police arrived at the Herald Towers at approximately 4:15 a.m., in response to a call regarding an unconscious female. The towers are located at 50 West 34th Street, on the same block as the Empire State Building.

The officers discovered the teen on the third-floor ledge of the building. She had severe trauma to her body and EMS workers pronounced her dead at the scene.

Reports state the girl was attending a party in the building on the 25th floor. Alcohol is believed to have been a factor.

While circumstances surrounding the fatal fall remain under investigation, police reportedly took the resident of the apartment where the party was held in for questioning. Detectives told the press they do not believe criminality was involved in the fall. Charges related to providing an environment for underage drinking could be filed though.