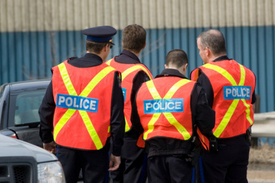 Pittsburgh, PA – Pittsburgh police began an investigation into the hit-and-run accident which left a man injured on Friday, August 27, 2010, as reported by WPXI. Authorities have named a Kennedy Township officer as the suspect.

According to police reports, a Pittsburgh officer found a man lying in the street on the 1600 block of West Carson Street during his patrol. The man was unconscious and it was obvious he had been hit by a car.

The unidentified victim was transported to UPMC Mercy Hospital with a severe head injury. He was reportedly in critical condition upon arrival.

Police reported the driver, an off-duty Kennedy Township Police officer showed signs of intoxication following a breathalyzer test at the scene. The officer in question was released pending charges and further investigation by the Pittsburgh Bureau of Police collision Investigation Unit.

West Carson Street remained closed throughout the majority of the morning as police investigated the accident.