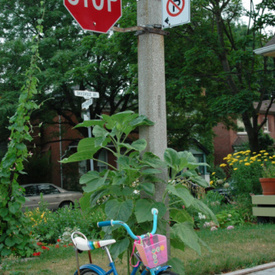 Ambridge, PA – Police are searching for a driver who hit a 9-year-old girl as she rode her bike along the sidewalk of her neighborhood on Wednesday, August 25, 2010, as reported by WPXI.

Syanna Stevenson said she was riding along the sidewalk when someone driving a dark-colored sport utility vehicle struck her. The vehicle continued on as it drug the bike approximately 20 feet.

She told reporters, “I was just riding my bike and I got knocked down. Then I fell straight off the bike. I think it was the mirror.”

She reported she believed she saw the driver talking on a cell phone.

Spike Berry, the girl’s grandfather, said, “They drive live crazy here. There are all kinds of kids who ride bikes. The driver had to know.”

Police stated the driver’s SUV was either charcoal or black. Investigators said the driver must have known they hit something.

The little girl suffered minor injuries from the fall.

An investigation continues as police search for the hit-and-run driver.