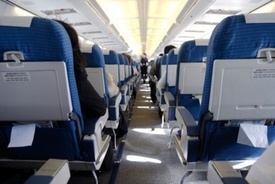 Dallas, TX – A 41-year veteran worker of American Airlines was charged with theft after investigators found 171 items believed to have stolen from vacant airplanes at Dallas-Fort Worth International Airport, and the company itself, as reported by The Dallas Morning News.

Henry Ibarra, 59, is employed by American Airlines as a plane cleaner. He is suspended from work as the airline investigates the charges.

Ibarra reportedly targeted empty planes at the airport and is believed to have pilfered valuables such as cameras, electronic devices, sunglasses, e-book readers and airline property.

He was arrested after an American Airlines passenger told authorities she left her Palm Pre, a smart phone, on a plane in July. Police traced the phone to Ibarra’s house. Upon investigation, they found Ibarra had given the phone to his son, who in turn erased all the previous owner’s information and uploaded his own.

Upon arriving at Ibarra’s home, investigators found thousands of dollars worth of allegedly stolen property. According to airport spokesman David Magana, police recovered an estimated $7,500 worth of property. But, Magana added, that sum was only an estimate of the value of half of the things that were found.

Neighbors described the accused thief as a family-oriented man who is kind and enjoyed talking about his job.

Andrea Hugely, an airline spokeswoman, told the press, “American Airlines takes situations like this very seriously. We worked closely with local police on this matter, which ultimately led to the arrest of our employee. While the overwhelming majority of our employees are honest and hardworking, we have absolutely no tolerance for any dishonest behavior and will take appropriate action as necessary.”

Police are currently trying to match found items with their past owners.