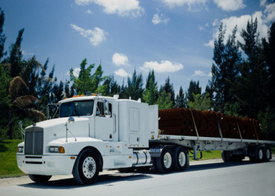 Cecil Twp., PA – An automobile accident between a Toyota Prius and tractor trailer along Interstate 79, near the Southpoint exit in Cecil Township on Monday, August 16, 2010, resulted in the Prius driver’s death, as reported by The Pittsburgh Channel.

The accident occurred after the Prius rear-ended the rig, which was carrying a load of rebar that reached beyond the end of the flatbed.

An eyewitness to the crash told Channel 4 Action News that the driver of the Prius did not appear to hit the brakes before hitting the truck.

Washington County Coroner Tim Warco reported the impact of the crash impaled the car on the rebar, but not the driver. Warco said the driver appeared to have suffered fatal injuries from the force of the impact.

Warco told reporters, “The driver of the 18-wheeler noticed an abrupt jolt in his rig, looked in the mirror and saw a car obviously trailing behind it, obviously rear-ended him. He immediately pulled off to the berm of the road, got out, tried to render the victim aid. But it was too late, he was deceased.”

The driver is reportedly from Ohio. His identity was withheld as of Monday morning pending family notification.

The driver of the tractor trailer was uninjured.

State police re-routed traffic and traffic was slow until noon.