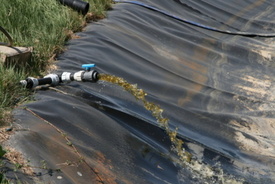 Frederick, MD – Families near Fort Detrick are claiming their loved ones died of cancer spurred by contaminants buried in landfills for nearly three decades, as reported by WUSA9.com.

According to Robert Craig, the environmental coordinator at Ft. Detrick, “These chemicals were buried in the ‘50s and ‘60s. They did leak into the ground water. And we now know they have migrated downstream and have in fact gone off post.”

He says the practice was stopped in 1976, and in 1992 when a problem with groundwater contamination was discovered.

Some of the waste has been removed, and six landfills have been capped, thanks to a $43 million project.

Resident Randy White lost his daughter to brain cancer, and another battled tumors. He says his ex-wife is battling with terminal cancer. He told reporters, “I’m glad that they’re doing something, but they’re 20 years late.” He adds, “The problem is not just the ground water. We’re also dealing with the chemical Agent Orange.”

He, like many others, wants answers from Ft. Detrick.

A group from Ft. Detrick gave reporters from 9NEWS NOW a tour of the landfill and said they are trying to uncover every hazard created by the dumping. They also claim they are looking into concerns of Agent Orange.