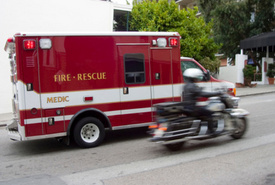 Somerville, MA – A woman was shot and killed by police and three officers were injured during a domestic dispute in Somerville on Friday July 23, 2010, according to The Boston Globe.

Authorities reported police responded to a home in the city at approximately 6:30 a.m., after a man called to say his girlfriend lunged at him with a knife and tried to set a fire.

When officers arrived at the residence, the woman attacked the officers with a knife. She injured three officers.

In response, officers opened fire on the woman and killed her.

The injured officers were taken to a hospital for treatment. Their injuries were not deemed to be life threatening.

The names of those involved were released yet.