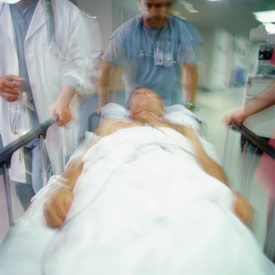 Summit, NJ – A nurse from Overlook Hospital in Summit, NJ was charged Monday, July 26,2010 with stealing over $600 from a patient who was beaten to unconsciousness and later died, as reported by The Star-Ledger.

Abelino Mazariego-Torres was beaten by teenagers in what is thought by police to have been an unprovoked attack. He was knocked unconscious from the beating and taken to the emergency room at Overlook Hospital Saturday, July 17, 2010. Mazariego-Torres died of his injuries Tuesday.

Stephan Randolph, 39, of Flemington, was charged with third-degree theft for stealing approximately $640 from the patient.

It is believed that Mazariego-Torres was carrying the cash after receiving pay from the Springfield Avenue restaurant where he worked as a dishwasher.

His family realized the pay was missing from his wallet upon receiving his belongings and alerted Summit police.

Mazariego-Torres, 47, was found unconscious, alone and bleeding from the mouth, sitting on a bench along Springfield Avenue. Police initially treated the situation as a medical call, but changed their thoughts when his wife told them about a video circulating among teens in the city.

The video shows two teens accosting the man as he sat in the Summit Promenade park on Saturday evening. As one boy grabbed the man’s shirt and held it in front of his face, another punched him in the face and head.

So far, three teenagers have been charged with manslaughter. Khayri Williams-Clark, 18, was released on $100,000 bail. Nigel Dumas, 19, and a 17-year-old are also facing charges.

It was also reported by NJ.com that about a dozen young men were present for the beating. A 19-year-old male Alex Ruiz, told reporters he was in the Summit Promenade with a group of friends when the two people attacked Mazariego-Torres while a third taped the act. He said, “We never thought the guy would die. Ruiz faces no charges as of yet.

This incident is the second in less than a month where teens have targeted foreign-born individuals.

The case will go to a grand jury.