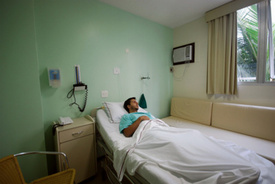 Donegal Twp., PA – A northern Butler County man suffered burns in an explosion at his home on the evening of Sunday, July 25, 2010, as reported by WPXI.

Authorities reported the victim, Paul Edwards, 33, flipped an electrical switch that created a spark, thus igniting gas inside a water well and resulting in an explosion right in front of Edwards.

Edwards suffered second-degree burns to his back and arms. He was flown to a burn center at West Penn Hospital.

Firefighters said they believed the natural gas leaked into the well located on Hildebrandt Road.

Edwards told reporters he was setting up a water slide in the yard for his children at the time of the explosion. He said he went to the well to hit a switch to begin pumping water, but that obviously did not happen.

He recounted, “I bent down. As soon as I flipped the switch up, it exploded, just blew my shirt off. That’s how I got burnt.”

He likened the sound to that of a bomb.

He added, “All the skin was hanging off…That’s how fast it happened. That’s how hot it got.”

Officials are testing to determine exactly what kind of gas seeped into the well.