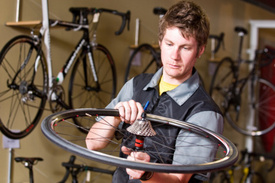 Buffalo, NY – Buffalo police are investigating reports that a white Nissan hit a 19-year-old bicyclist on purpose and left the scene of the accident, as reported by WIVB.com.

Joe Whyte, of Kenmore, claims his bicycle was damaged by the front hood of the car that hit him as he was riding on Allen Street near Delaware Avenue.

Whyte told reporters the confrontation with the driver started on Allen near Franklin at approximately 4 a.m., Sunday morning as he rode with several friends.

Whyte said the driver yelled, “Get out of the street or I’ll run you over,” adding that the driver then headed in the bicyclists’ direction.

The driver passed the bicyclists, but was stopped at a red light at the next intersection, prompting Whyte to lash back at the driver’s rudeness. Whyte explained that as the driver was stopped he called him a “scumbag.”

After he expressed his feelings towards the driver, he continued to ride up Allen Street. This is where the driver took aim.

The hit-and-run vehicle is described as a white Nissan Maxima with orange New York license plates.

Whyte suffered some scratches and back pain, along with a damaged bike from the incident.

Anyone with information on the incident is asked to call the tip line at (716) 847-2255. Information can also be texted to the number.