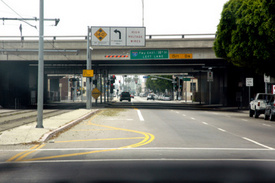 Baltimore, MD – A Baltimore City police officer was suspended after ignoring repeated orders to end a high-speed chase that ended with the death of a motorcycle driver Sunday, July 25, 2010, as reported by the Baltimore Sun.

Officer Timothy E. Beall, 31, will remain suspended as an internal investigation is conducted, according to police spokesman Anthony Guglielmi.

The motorcyclist, Haines E. Holloway-Lilliston, 27, was pronounced dead at the crash site on Interstate 695, close to the Dulaney Valley Road exit.

Maryland State Police reported the motorcycle chase began at approximately 3 a.m. when Beall tried to pull over the biker based on knowledge the biker had been racing with another vehicle on Northern Parkway. After the initial attempt to have Holloway-Lilliston pull over, the biker sped away, heading north on I-83.

Beall pursued the motorcycle and called state police to say he believed the bike was stolen.

Although police supervisors repeatedly ordered Beall to end the pursuit, he followed the motorcycle onto eastbound I-695, outside of city jurisdiction, according to city and state authorities. The cruiser and motorcycle crashed on the ramp to southbound Dulaney Valley Road.

While the motorcycle was displaying tags assigned to a different vehicle, it had not been reported stolen. Holloway-Lilliston did not have a motorcycle license, but did have a standard Maryland driver’s license.

Beall was ordered suspended with pay, according to Gugliemi. He is on desk duty.

Gugliemi explained that police are instructed to chase a vehicle only if the driver or passengers are believed to have committed a violent crime or pose a risk to public safety. Robert F. Cherry, police union president, added in Beall’s defense that he may not have heard the commands to stop because of street noise and sirens.

As of Sunday, July 25, no charges were filed.