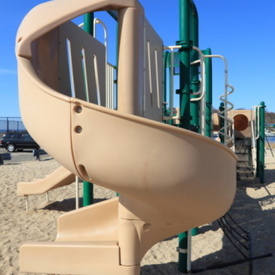 Jersey City, NJ – A 7-year-old boy was left alone in Mary Benson Park on Thursday, July 15, 2010, after he fell asleep inside a tunnel slide and was left by his day care, as reported by The Jersey Journal. The boy’s mother, Raquel Gonzalez, plans to sue.

According to police reports and testimony from the mother, at some point between noon and 12:30 p.m. a Spanish-speaking woman found the boy crying inside the tunnel slide at the park behind School 5. The park is approximately three blocks away from Future Stars Day Care, the facility that was responsible for the boy.

Jonathan and the woman were unable to communicate due to the language barrier, so she walked him to School 5 and found a teacher who could help.

The teacher realized she knew the boy’s grandmother and had previously met his mother.

Thus, Raquel Gonzalez was called and immediately left her job at a Jersey City health clinic to retrieve her scared son.

EMTs from the Jersey City Medical Center confirmed the boy was unharmed, according to the police report.

The report also states that upon questing Future Stars about the boy’s whereabouts, they failed to realize he was missing.

The officer had to inform the workers they left him at Mary Benson Park.

Jonathan was moved to a new daycare center, but his mother claims the abandonment haunts him.

She explained, Till now he’s still unable to sleep…All night, all he keeps sayin’ in his sleep is ‘Please take me home.’”