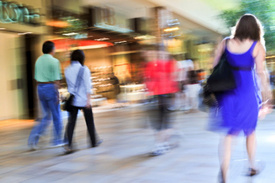 Trumbull, CT – A wall in the food court of the Westfield Trumbull shopping mall collapsed Saturday, July 18, 2010 and injured 2 people, as reported by the Connecticut Post. Town officials and mall executives are looking into the cause of the accident.

The mall is undergoing a $45 million renovation that includes areas in the food court.

Along with town officials and Westfield mall executives, structural engineers will review the construction project and make recommendations about ongoing construction.

On Saturday afternoon, Trumbull police were called to the shopping mall’s food court on a report of a structural collapse with injuries. A 40- to 50-foot section of the facade above Sbarro’s pizza collapsed and injured two people.

Evmorfia Zoulis, 61, of Shelton, was struck by the fallen debris and knocked down, according to police. She was reportedly bleeding from her left hand and complained of neck pain.

Brian Luna, 2, of Bridgport, received a bump on his head.

Both injured parties were transported to St. Vincent’s Medical Center in Bridgeport.

First Selectman Tim Herbst said, “The safety and security of the people who use the mall is of top priority, not only to the Town of Trumbull, but also to Westfield.”