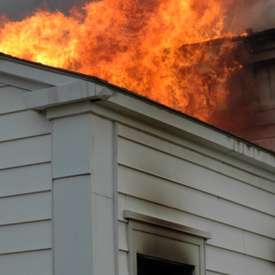 The fire on South Street in Boston’s Jamaica Plain neighborhood was reported at approximately 10:15. After 24 firefighters initially responded to the blaze, more were called in, resulting in at least 100 firefighters helping to stop the fire. The fire had jumped from a two-alarm blaze to four-alarm. The effort to quell took 45 minutes, according to officials.

Smoke seeped into neighboring homes and businesses, prompting people to move themselves and their pets elsewhere to avoid any illnesses.

Joseph Fleming, deputy chief of the Boston Fire Department, told reporters the fire may have ignited near a couch on the second floor, but explained the incident was still under investigation.

Fire spokesman Steve MacDonald reported the estimated damage was near $500,000.

One firefighter sustained burns to his hands. A second firefighter received burns on his neck. MacDonald also reported another firefighter was treated for a back injury, while two officers suffered a dislocated finger and a cut to the hand.

Unfortunately, a few residents lost their pet cats. Two of the were rescued though.