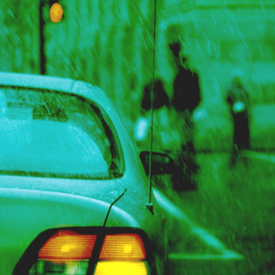 Columbia, MD – A 53-year-old man was sentenced Wednesday, July 14, 2010, to six months of jail, plus 500 hours of community service for hitting an 81-year-old woman at a crosswalk last November and leaving the scene, as reported by The Baltimore Sun.

Judge Lenore Gelfman sentenced James Walden Beaman, Jr., of Columbia, to 18 months of jail time. All but six months of the sentence were suspended. Beaman was also sentenced to two years supervised probation on convictions for failing to stop for a pedestrian in a crosswalk and leaving the scene of the accident.

The woman, Ayten Icgoren, died the day after being hit, according to prosecutor Danielle Duclaux.

Reports indicated Icgoren was attempting to cross the 7200 block of Cradlerock Way on the morning of November 24, 2009. Two witnesses reported that Beaman’s white Toyota truck wobbled and seemed to skid as he attempted to stop. While the truck initially fled the scene, it later returned after police and paramedics arrived.

Beaman pleaded not guilty in May, but agreed to the facts presented by the prosecution.

The woman was known throughout the neighborhood for her 2008 animal neglect conviction. She apparently lived with dozens of cats and her daughter. She was sentenced to 74 days in prison, a day for each cat that died under her care.