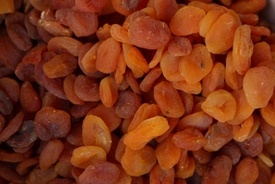 New York, NY – Diamond USA Inc., in cooperation with the U.S. Food and Drug Administration, issued a recall of its 1 lb. packages with code #01-12-2010 of “Dry Apricot Rolled,” due to undeclared sulfites in the product. The announcement was made via press release on Tuesday, July 13, 2010.

People who have severe sensitivities to sulfites may be prone to serious or life-threatening allergic reactions if the product is consumed.

The Dry Apricot Rolled was distributed in New York, New Jersey, Virginia and California to various retail stores. The apricots are a product of Afghanistan.

The recall was initiated after a routine sampling conducted by the New York State Department of Agriculture and Markets Food Inspectors. Subsequent analysis by Food Laboratory personnel revealed the presence of sulfites.

According to the release, “The consumption of 10 milligrams of sulfites per serving has been reported to elicit severe reactions in some asthmatics. Anaphylactic shock could occur in certain sulfite sensitive individuals upon ingesting 10 milligrams or more of sulfites.”

No illnesses or reactions were reported in connection with this recall.

Consumers who purchased the products are urged to return them to the place of purchase for a full refund. Consumers may contact the company at (718) 38-0345.