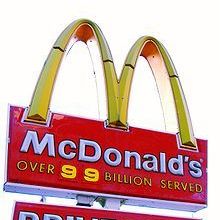 Phoenix, MD – A McDonald’s franchise owner was ordered to pay nearly $30,500 in back wages and child labor penalties for his failure to pay overtime and willingness to break child labor laws, as reported by The Baltimore Sun.

The Baltimore County man has already paid $20,502 in back wages to five workers, two of whom are still employed there. Bill Taylor, president of B&D Taylor Inc., was found guilty of not paying overtime rates to employees at his McDonald’s restaurant on Sweet Air Road in Phoenix.

He was also ordered to pay $9,900 in fines for violating the restrictions on the hours minors are legally allowed to work and tasks they may perform, according to Department of Labor officials.

Joanna P. Hawkins, deputy regional director at the U.S. Department of Labor offices in Philadelphia, reported an investigation found employees aged 14 and 15 were working longer than three hours on school days. While the cutoff time for minor students is 7 p.m. on school nights, employees of Taylor’s were apparently working late into the night.

The Department also claimed the fast-food establishment violated safety standards by allowing nine minors to operate a deep fryer. Child labor laws prohibit this task. Hawkins explained, “All of the minors that utilized the fryer did so at the discretion of various store managers as well as senior staff members and on a regular and recurring basis.”

John Kelly, acting director of the Wage and Hour Division’s Baltimore District Office, issued a press release regarding Taylor’s failure to pay the mandatory time and a half for overtime hours, stating, “Fast food restaurants like McDonald’s have a legal responsibility to properly compensate workers, as well as ensure that any employed minors who work appropriate hours in allowable occupations.”

Taylor could not be reached for comment, according to The Baltimore Sun.