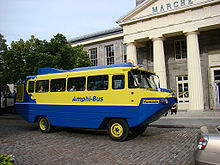 Boston, MA – A Boston bride on the way to her wedding was involved in a collision Tuesday, July 13, 2010, as her Honda Civic became wedged between a Boston Duck Boat and a delivery truck on Court Street near Government Center, as reported by The Boston Channel.

The bride and two other women were inside the car at the time of the quasi-crash. The two women with the bride were forced to climb out of the hatchback to get out, according to witnesses.

Passengers on the sightseeing tour said the blue Honda was attempting to squeeze between the amphibious tour bus and a delivery truck when it became lodged between the two.

One boat rider explained, “We were cut off by another vehicle when we were driving down the street. You could hear a loud crushing noise. We couldn’t see anything because the vehicle was so small, and then we stopped.”

While passengers and the duck boat driver claim the accident was at the fault of the Honda driver, she claimed innocence. She said the duck boat hit her, claiming, “I wasn’t really in a rush. I thought this was a turning lane to go left. And I went to go and the duck tour hit us and dragged us and pushed us into that truck. And that was it.”

She was cited by police after they arrived at the scene.