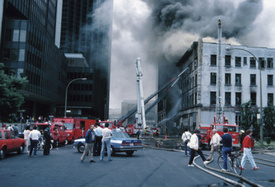 The blaze broke out at approximately 10:20 a.m. on the building’s sixth floor and lasted over two hours, according to a deputy chief for the New York City Fire Department.

According to New York City Fire Department Deputy Assistant Chief John Sudnick, “These last couple days have been a tough stretch for the FDNY. We’ve had several multiple-alarm fires where firefighters are put under extremely punishing conditions. What we try to do with these situations is try to relieve, rotate our personnel as quickly as possible, to try to relieve some of the heat stress placed upon them. These are very difficult conditions to work under.”

Officials from the FDNY reported the fire quickly spread within the apartment, between the ceiling of the top floor and the roof of the building.

Residents were awakened to firefighters banging on the doors telling them to get out of the building.

Six apartments were destroyed, and according to the Red Cross, as many as forty may have been affected.