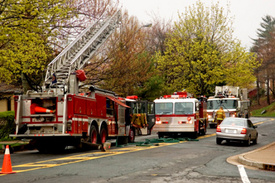 Staten Island, NY – An early morning fire on Wednesday, July 7, 2010, ravaged the inside of a home at 122 Roe St. in West Brighton and injured five people, as reported by Staten Island Live. The fire also took the life of a dog.

The fire began shortly after 7:30 a.m., Wednesday morning. It engulfed the first and second floors of the home, and required the response of a dozen fire trucks.

The homeowner was asleep on the second floor when the fire started on the first floor. The person was then transported to Richmond University Medical Center for treatment of minor injuries.

Four firefighters were treated at the scene, according to the fire chief at the house, and were later taken for examination to RUMC.

The fire chief reported the homeowner had a large amount of collectibles on the first floor, which helped fuel the fire. He also reported the fire will be investigated by fire marshals.

Firefighters rotated shifts to avoid prolonged exposure to the fire and high heat.

No surrounding homes were damaged by the flames.