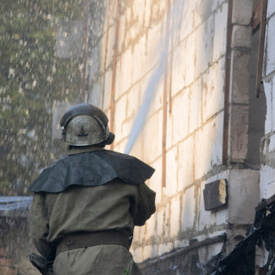 Philadelphia, PA – A man who was known throughout his neighborhood as kind, loving and “a beautiful person,” died Tuesday, June 29, 2010, when he fell from a ladder three stories high after a fire pushed him out of his home, as reported by The Philadelphia Enquirer.

At approximately 4:24 a.m., Tuesday, a fire began in the three-story rowhouse the Cuban-born man lived in. The 60-year-old man fell from a ladder hanging from a third-floor window.

He was suffering from second- and third- degree burns and multiple fractures when he was transported to Temple University Hospital. He died at approximately 8:01 a.m.

Four other residents of the house escaped injury, including a 7-year-old boy who was tossed from a window into the arms of another boy on the ground.

A firefighter suffered minor injuries. He was taken to Temple University Hospital, treated and released.

The blaze was brought under control within 24 minutes of firefighters arriving at the scene.

A neighbor reported the name of the man who was beloved by his community, but it will not be released until family members are notified.

The man moved into the home almost a year ago. He helped neighbors move groceries and brought souvenirs from his travels to his friends.