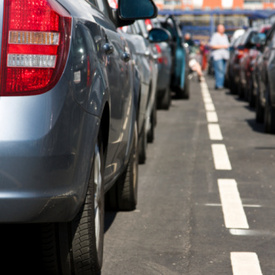 New Rochelle, NY – A six-vehicle accident on the northbound lanes of Interstate 95 on Tuesday, June 29, 2010, resulted in four injuries and backed up traffic, as reported by The Journal News. The series of accidents that led to the events began at approximately 1:50 p.m.

According to police reports, three vans were involved in a minor accident near Exit 16. The accident blocked the left lane of the highway.

The drivers got out of their vans and were standing away from their vehicles on the side of the road when a fourth vehicle struck one of the vans. Police stated the fourth vehicle was traveling at a high rate of speed.

To add to the calamity, a fifth vehicle somehow became wedged in between two of the original vans. A sixth vehicle joined the crash when it collided with the pile of vehicles.

The sixth vehicle only sustained minor damage to its side-view mirror.

Joseph Russo of Walden sustained injuries after he was pinned between two vehicles. Other injuries ranged from a sprained wrist to a broken pelvis.

The pile-up left I-95 shut down for approximately two hours and backed up traffic all the way to the Bronx as police inspected the scene.