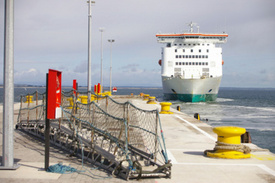 Staten Island, NY – A ferry that was involved in a fatal wreck in 2003, crashed into its terminal Saturday, May 8, 2010, resulting in an impact jolt that injured up to 37 people, as reported by the Boston Globe.

The accident occurred at approximately 9:20 a.m., while the Andrew J. Barberi pulled into the St. George Ferry Terminal on Staten Island. The ferry was transporting 252 passengers and 18 crew members.

Federal investigators reported that the engine conditions had appeared normal and no alarms had sounded before the boat crashed.

A National Transportation Safety Board (NTSB) team of seven members has been put together to investigate the event and determine the cause.

Drug and alcohol tests were conducted after the incident. Alcohol tests came back clear. Drug tests are under evaluation, according to NTSB member Robert Sumwalt.

New York City Department of Transportation Commissioner Janette Sadik-Khan said the accident seemed to be the result of a mechanical failure.

A passenger reported becoming alarmed as the ferry approached the shore faster than it usually does. He told reporters, “It was not slowing down…He was going too fast.”

While the cause of the malfunction that lead to the crash is unknown, it is believed that the ferry’s throttle failed to engage as it prepared to dock. With an idle throttle, the crew was unable to use the engines to apply reverse thrust and slow.

It was reported that the ferry suffered significant damage to its ramps and gouges in the decks above the waterline. Pier ramps were damaged as well. The Barberi will be taken out of service.

The NTSB is expected to spend up to a week collecting data and evidence relevant to the accident. The team will then return to Washington, DC, where it will further analyze the information to determine the source of the malfunction. The results could take up to a year.