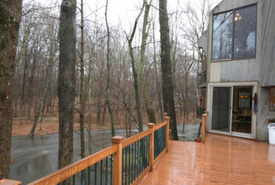 Nashville, TN – A Forest Hills girl was sucked into a 36-foot drain pipe on Saturday, May 1, 2010, as flood waters ravaged areas in Middle Tennessee, as reported by www.WSMV.com. The 10-year-old girl was sucked underground by overflowing ditch water, and lived to tell about it.

Shaun Carrigan and his family went outside to see the flooding and overflowing creeks around their home on Saturday, May 1. Carrigan’s eldest daughter, Delaney, and her best friend Marie were standing over an overflowing ditch watching the flow of the water, when they got too close.

Shaun reported grasping the terror Delaney and her friend must have felt in his description of the event: “I heard this screaming, and it was like the most guttural, animalistic, horrifying thing I’ve ever heard…I ran as fast as I could and saw Marie with her face (barely) out of the water, screaming.”

Delaney had already been sucked into the pipe that spanned two driveways.

From there, Delaney was sucked into a drainage pipe that measured18 inches wide by 36 feet long. The pipe was made with a distinctive bend, contained corrugated metal and was filled with debris from the flood.

Her father reported running to the other side of the pipe and finding Delaney’s rain coat floating in the water. Delaney came out, face down in the water. Her lips were blue.

Delaney woke up though, completely on her own, as her father, who had taped the entire incident on video, sat there thinking of what to do next. Shaun had told reporters that after picking his lifeless child out of the water, he thought, “I guess this is where you do CPR,” before she began breathing on her own.