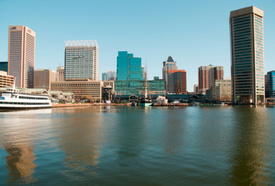 Baltimore, MD – Baltimore was the site of six shootings, some of which resulted in death, over the weekend of May 8, 2010, as reported by the Baltimore Sun.

At approximately 10:30 p.m., Saturday, May 8, police responded to a call about gunshots in a community in North Baltimore. They found a burgundy Buick Park Avenue on the 900 block of North Hill Street parked and running. Inside were two men who had been shot and killed. They were still seat belted.

Four hours prior, at approximately 6:30 p.m., East Baltimore police responded to a 911 call about a single gunshot. They found a 42-year-old man in an alley near North Collington Avenue kneeling on the ground. He had received a gunshot wound to the front of his neck and collapsed as police reached him. He was pronounced dead at the scene.

At approximately 6 p.m., a man was shot in the foot, also in the Govans area. At approximately 8 p.m., an adult female suffered a graze wound to her back in East Baltimore.

On Sunday, May 9, city officers announced they made two gun arrests over the weekend.

Steven Bulter, 23, was arrested on gun and drug charges. He was found in Northwest Baltimore carrying a loaded 9 mm handgun and 16 zip-close bags of cocaine.

Cierra Lewis, 20, was arrested at a traffic stop. She was charged with possession of a .380-caliber Hi-Point handgun and marijuana.