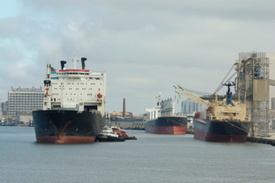 Bangor, ME – Criminal charges have been filed against the owners and some of the crew of a ship registered in Cyprus, for the alleged illegal discharge of bilge oil, as reported by Bangor Daily News.

Lemissoler Shipmanagement Ltd., of Limassol, Cyprus, and Volodymyr Nikolayev have been charged with removing a gauge so the alleged discharge of bilge oil waste could no be detected, falsifying the ship’s oil logbook and ordering two shipmates to lie to authorities.

Bilge oil is waste oil that accumulates within ships, usually in small quantities, inside the lower spaces of the vessels.

While court documents did not indicate whether the alleged dumping happened in Maine or international waters, the executive director of the Eastport Port Authority, Chris Gardner, reported there was no indication the ship polluted the waters in or near Eastport.

The cargo ship, named the Margit Gorthon, docked in Eastport on February 1, 2010, and was reportedly detained three days later.

Gardner reported that the detainment in Maine, “has very little to do with the Port of Eastport,” and that the ship, “ happened to be getting ready to untie from our pier [when it was detained].”

Lemissoler Shipmanagement Ltd. and Nikolayev face charges of violating the 1973 International Convention for the Prevention of Pollution from Ships and a 1978 protocol relating to the convention. The regulations stated that discharges of bilge waste from machinery spaces must contain less than 15 parts per million of oil.

Court documents state that authorities found evidence that untreated, oil-contaminated waste was discharged from the ship directly into ocean waters.

An engine crew member told Coast Guard inspectors that the bilge-oil had been pumped from storage tanks, through the bilge piping system, through a valve and into the emergency overboard discharge system. Upon reaching the discharge system, the waste was dumped overboard. The discharge of bilge waste and dirty lubrication oil was not recorded in the oil record book.

Crew members reportedly showed investigators where the valve was hidden so investigators would not discover the discharge. They also admitted that Nikolayev had told them to lie to authorities about the situation.

Representatives from the company are scheduled to appear in court Thursday, May 20, in U.S. District Court in Portland, Maine.