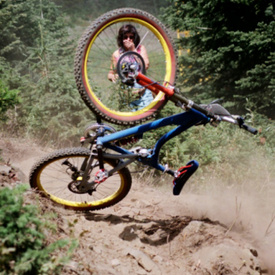 Hartford, CT – A former television show host was awarded $2.9 million on Friday, May 7, 2010, for injuries suffered from a bicycle accident on land owned by the Metropolitan District Commission, as reported by the Hartford Courant.

A six-person Superior Court jury awarded Maribeth Blonski of Rocky Hill the sum after deciding that the regional water and sewer authority improperly placed a steel gate across a path the woman was riding on. The steel gate was laid across a path within the Talcott Mountain Recreation Area. The MDC installed the gate to block vehicle access to the nearby water, according to reports.

On May 16, 2002, Blonski was riding her bike through the reported trail when she struck the gate. She broke four vertebrae in her neck as a result of the accident.

When the accident occurred, Blonski, now 43, was the host of a local-access television show that focused on mountain biking. She now works the front desk of a health club, according to her lawyer. Previous to these employments, she was a children’s book illustrator.

The case took eight years to reach a verdict due to a dispute from MDC stating they were immune to responsibility. After a trial on MDC’s immunity, the jury found the company was not immune to charges. They also found that Blonski held some liability as well.

Blonski offered to settle the case without the trial for a lesser amount than was finally awarded. The Metropolitan District Commission refused though.