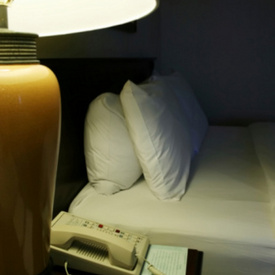 Ramapo, NY – Ex-New York Giants, 10-time All-Pro linebacker Lawrence Taylor was charged Thursday, May 6, 2010 with third-degree rape and patronizing a prostitute, as reported by CNN. The rape charge is related to the consensual sex with a 16-year-old girl.

Taylor’s lawyer told reporters the Hall of Fame football player denies the charges and will fight them.

Lawrence Taylor, also known as “L.T.,” was arrested in a Holiday Inn room in Ramapo at 4 a.m. Thursday, a few hours after the supposed rape took place. Ramapo is approximately 30 miles northwest of New York City.

The rape charge could result in a four-year sentence. The patronization charge, a misdemeanor, could carry a one-year sentence in prison.

According to reports, the 16-year-old runaway was taken to the hotel room by a pimp on Wednesday night. When the pimp and the girl returned to New York early Thursday, she apparently text-messaged an uncle who then called the police.

New York police arrested the pimp and reported the incident to the Ramapo police.

A detective with the force said that Taylor was cooperative with authorities, and while they found a bottle of alcohol in his room, he showed no signs of inebriation. There were no drugs in the room.

Taylor’s agent, Mark Lepselter, told reporters Taylor was very upset about the charges. He lamented, “He’s worked very hard over the last 12 years to change perceptions about him.”

Taylor was twice suspended by the NFL for substance abuse. He battled an addiction to cocaine for years after retirement. He was on ABC’s “Dancing With the Stars” in 2009, and made it to the seventh round before being eliminated.