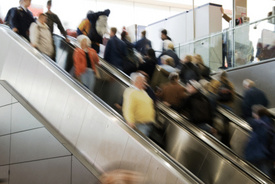 Legal news for New York personal injury attorneys – A woman rushing down up-only stairs was pepper sprayed for not having ID and trying to call  her mother.

Queens, NY (www.NewYorkInjuryNews.com) – The NYPD has reached a $65,000 settlement with a Queens woman who was pepper sprayed after running down an up-only stairwell, as reported by New York Daily News.

The settlement comes after a complaint against an officer was filed in Brooklyn Federal Court.

Naeema Screven was trying to catch a train on April 20, 2007, when she tried to bypass a hoard of commuters at the Broadway station in Brooklyn and ran down an up-only staircase.

Officer Elix Hernandez claimed he went after the late woman after her shoulder bag hit several straphangers as she zoomed down the stairs.

Screven’s attorney ridiculed the officer’s motive, explaining, “C’mon, this is New York City, bumping into three people while you’re trying to catch a train happens every day,” further adding, “The officer’s actions were over the top.”

When the officer caught up with Screven he demanded to see her identification, whereupon Screven realized her ID was in another bag.

The late and now upset Screven started to cry and flipped open her cell phone to call her mother. Hernandez retaliated with pepper spray.

Screven was charged with disorderly conduct. She spent 15 hours in jail.

An attorney for the city described the settlement as “in the best interest of both parties.”