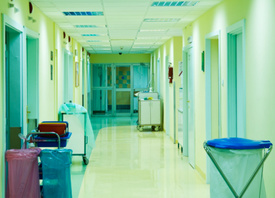 Legal news for Massachusetts wrongful death attorneys – The family of a man who died after being restrained by hospital security guards says death has been ruled a homicide.

Hyannis, MA (www.NewYorkInjuryNews.com) – The family of a Mashpee man who died after being restrained by security staff released a hand-written statement, claiming the state medical examiner has ruled the man’s death a homicide, as reported by The Cape Cod Times on Friday, April 16, 2010. The statement is the first public comment of any kind from the family since the October incident.

On October 9, 2009 Daniel Ryan went to a Cape Cod hospital to visit his wife Jaime. According to a report from the Department of Public Health, Ryan began exhibiting strange behavior while at the hospital. Witnesses and staff saw Ryan run from the emergency room and through hospital hallway.

A staff member grabbed Ryan by the arm and pulled it behind him, spurring Ryan to trip over the sheet that was over his head. A security officer then put him in a head lock and flipped him, while another officer subdued him. A third officer positioned himself at Ryan’s head.

The statement released by the family declared, “The medical examiner has ruled it [Ryan’s death] a homicide caused by compression to Daniel’s neck and chest in the commission of a restraint.”

The Cape Cod Times stated that an anonymous law enforcement official with ties to the case confirmed the family’s reports that the death has been ruled a homicide. This ruling means Ryan’s death was resultant of human actions, rather than medical conditions or other circumstances.

District Attorney Michael O’Keefe refused yesterday to confirm details from the letter, and only repeated the statement he gave last week: “The autopsy has been completed and we are going over it very carefully and will make an announcement in due course with respect to further action we expect to take.”