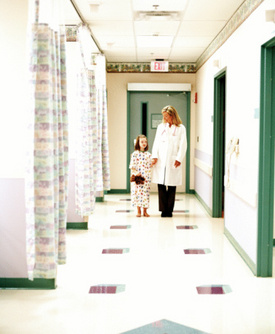 Legal News for Delaware medical malpractice attorneys – A Beebe Medical Center pediatrician who is charged with 471 counts of sexual abuse had been previously investigated.

A DE hospital has admitted to withholding information of prior sexual abuse investigations of a doctor.

Lewes, DE (www.NewYorkInjuryNews.com) – Officials at Beebe Medical Center have admitted to previously investigating abuse reports of a doctor who is now charged with molesting over 100 patients, as reported by The Philadelphia Inquirer on Monday, April 19, 2010. The 1996 complaints were dismissed and the doctor was cleared of any wrongdoing.

In 1996, a hospital nurse reported that Earl Bradley may have inappropriately touched young female children. The nurse reported several issues, specifically the doctor’s practice of using a catheter to obtain urine samples from young girls. She told officials Bradley undressed the girls before exams and raised concerns over the way he positioned them while he examined their genitals. The nurse was further concerned over Bradley’s hugging and kissing of patients.

When the issue reached Jeffrey M. Fried, CEO of Beebe Medical Center, he claimed he considered the issue a “clinical” concern, not a sexual abuse issue.

Bradley was later investigated in 2005 on suspicions of patient abuse. The hospital had been issued a subpoena seeking any complaints and disciplinary action taken against Bradley, but did not disclose the 1996 issue. The case ended without any charges against Bradley.

On December 16, 2009, Bradley was finally arrested after an investigation over allegations of abuse came from a two-year-old girl.

Bradley now faces 471 criminal charges, including rape, continuous sexual abuse of a child and sexual exploitation of a child.

Authorities reported finding videotapes of the pediatrician’s assaults, which included infants and toddlers. The recordings go as far back as 1998.