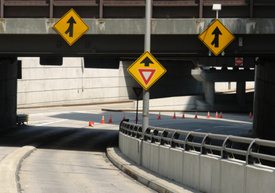 Legal news for Pennsylvania automobile accident attorneys – A police chase of a man wanted by the U.S. Marshals ended in a head on collision, injuring both drivers and killing 2.

Two people are dead after a man being chased by police drives wrong way down I-79 exit ramp.

Robinson, PA (www.NewYorkInjuryNews.com) – A car chase involving Robinson police resulted in a crash that killed two on Sunday, April 18, 2010, as reported by the Pittsburgh Post-Gazette.

Pennsylvania State Police reported the series of lethal events began when a Ford Crown Victoria traveling westbound on Steubenville Pike was sighted at approximately 1 a.m. and pursued by a marked Robinson police cruiser for reportedly “numerous traffic offenses.” The police cruiser’s lights and siren were on.  The driver of the Crown Victoria was reportedly wanted by the U.S. Marshals Service.

In attempts to evade arrest, the Ford made an illegal left turn onto Exit 60A, the off-ramp of I-79, resultantly traveling south on the northbound exit. The car struck a Toyota Prius head on.

Authorities have not yet released the name of the fleeing driver, but it was reported the 28-year old remained hospitalized as of Monday, April 19, 2010.