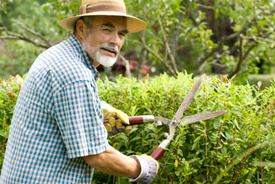 Legal news for Pennsylvania personal injury attorneys – A 69-year-old man was Tased by police after a shoving match ensued over yard-work confusion.

Scott Township officers used a Taser on an elderly man after he shoved a cop.

Scott Township, PA (www.NewYorkInjuryNews.com) – A 69-year-old man was Tased by Scott Township police officers on Wednesday, April 14, 2010, after a scuffle over yard work resulted in a shoving match, as reported by www.wxpi.com.

James Blystone was planning on performing some tree trimming work for a woman on Greentree Road on the morning of Wednesday, April 14. However, some confusion arose over why Blystone was at the house and when he was scheduled to perform the trimming work. As a result, the woman called the police.

When police arrived at the Greentree Road residence, Blystone was on his cell phone in his truck. He reported that he was attempting to contact the man who hired him for the work.

Police claim the tree-trimming elder became argumentative and combative upon being asked to exit the truck. According to police reports, Blystone reached into his jacket and when asked what he was looking for his hand flew out of his pocket.

Blystone allegedly pushed an officer during the confrontation, which spurred the Tasing event.

Scott Township Police Chief James Secreet explained the situation, “The officer felt the gentleman was getting out of control, thought someone was going to get hurt, so he did deploy his Taser.”

Blystone told reporters the Taser did not hurt as bad as the police efforts to subdue him. He claims the officers twisted his arms, which caused him pain.

Blystone was handcuffed and taken to the police station, where he was examined by medics and put into a holding cell. He was released later that day.

While Secreet claimed his officers were justified, Blystone said there was no reason for the struggle. He told reporters, “It was completely police brutality…I don’t care what they say, it was brutality.”

He is fighting the charges of simple assault, resisting arrest, disorderly conduct and harassment. He also said he will contact a lawyer.